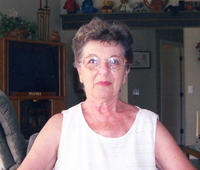 Theresa (Terry) Melch, Mowder, 92 of Bangor Pennsylvania, entered the Kingdom of Heaven on November 7th, 2022. Born in New York City, NY to parents Charlotte (Freidhoff) Vliet & Joseph Melchionna. She previously resided in Washington, NJ, Belvidere, NJ & Spring Hill, Florida. Above all, Terry was selfless. She spent most of her life taking care of others, including her down syndrome son, "Sweet Robbie". Along with her faith, Terry's family was always the most important thing in her life. The steady support, generosity, and love will carry on with her daughter and grandchildren. She regularly hosted family and friends who enjoyed her gifts of conversation, advice and her delicious cooking; most notably the best pasta sauce you've ever had. Terry was intelligent, witty, down to earth, and savvy. A devoted Christian with unquestionable faith, her daily prayer was to know God better and love him more. In her later years, she donated much of her time to the Slate Belt Nazareth Baptist Church where her priority was ensuring the Lord's house was suitable and honoring him. She will be dearly missed. She was preceded in death by her parents, husband David Mowder Jr of 46 years, and three sons, Robert (Robbie) Groff, William (Bill) Groff & Michael (Mike) Groff. Terry is survived by her daughter and caretaker, with whom she lived, Susan Kettenburg and husband Tim, Grandchildren, Jason Jenkins and wife Melissa, Jonathan Jenkins and wife Kathleen, Bill Groff and wife Malena, Joshua Groff and fiance Michele, Great Grandchildren Alyssa, Joseph, Liam and Leland Groff. Family and friends may pay their respects on Friday November 11, 2022 from 11 AM – 12 PM at the Warren Hills Memorial Home. 234 W. Washington Ave. Washington, NJ 07882. A funeral service celebrating Theresa's life will begin at 12:00 PM at the funeral home. Interment will follow at the Musconetcong Valley Cemetery in Hampton, NJ In lieu of flowers a donation to the National Down Syndrome Society in her name would be appreciated. (https://give.ndss.org/give/59045/#!/donation/checkout)