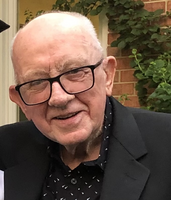 Patrick J. Breheny, 79, of Washington, formerly of Manville, NJ, passed away peacefully on September 29, 2021 at the Hunterdon Medical Center. Patrick was born on June 12, 1942 in Ballymote , County Sligo Ireland to the late Peter and Margaret "Mulhern" Breheny. Patrick was raised in Ireland and immigrated to the United States in 1961. He served proudly in the US Army. He was employed by Grand Union Trucking in Carlstadt, NJ for more than 25 years until his retirement in 1994. He was a member of Local 560 Teamsters Union. Patrick was a great storyteller and was very proud his Irish heritage. He was a fan of the NY Mets, Jets, Rangers and Notre Dame football. He was also a past member of the Manville Fire Department. Patrick is survived by devoted children Caroline, Ann Marie and her husband Scott Pitner, Steven and his wife Melissa and Brendan and his wife Kim; his caring sisters Mary Roche, Frances White, Sarah Donnelly, Rita Stretton and Veronica Drury, his beloved grandchildren, Riley, Morgan, Kristin, Kyle, Aidan and Liam; and many loving nieces and nephews. In addition to his parents, Patrick was preceded in death by his loving wife Brigid in 2017, his brother John Breheny and his sister Ann Reeser. Family and friends may pay their respects on Sunday October 3, 2021 from 4-7 PM at the Warren Hills Memorial Home. 234 W. Washington Ave. Washington, NJ 07882. Funeral services will be celebrated on Monday October 4, 2021 at 11:00 AM at the funeral home. Interment will follow at Musconetcong Valley Cemetery in Hampton, NJ. In lieu of flowers donations may be made in Patrick's name to the American Diabetes Association, PO Box 11454, Alexandria, VA 22312, http://www.diabetes.org/ Funeral arrangements have been entrusted to the Warren Hills Memorial Home. To send an on-line condolence please visit www.warrenhillsmemorialhome.com