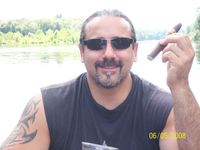 Erol Ata, 54, of Port Murray, NJ and previously Pompton Lakes, NJ passed away on January 28, 2021 at Hackettstown Medical Center in Hackettstown, NJ. Erol was born on August 17, 1966 in Paterson, NJ to the late Ali and Beatrice Ata. He was a graduate of Pompton Lakes High School, class of 1984 and then attended the County College of Morris. Erol worked as a Cigar Buyer at the Famous Smoke Shop in Easton, PA. He was a man of many talents and interests. He enjoyed photography and was a master at it, as well as mountain biking, working out, and cruising on his Harley. He knew everything there was to know about computers. He could build, design and create anything and was as an avid "Flipper / Reseller". Erol enjoyed cigars, cooking, and he was skilled at baking bread. He had a pilot's license to fly drones and would usually be found tinkering on something in the garage, and those were just a few of his talents! Erol is survived by his loving wife, Joanne, and three amazing pups: Max, Roxy and Ruby. He is also survived by siblings; brother, Kemal Ata, sister, Nuray De Anda and her companion Ozzie Cebeci; nieces and nephews; Peter De Anda and his fiancé Jennifer, Michael De Anda and his wife, Michelle, Timothy De Anda, Sakir Ata, Erica Ata, Errol Ata, Ayse Ata, Neyjla Ata, and Gina Crismon. Erol is also survived by his Goddaughters Kalina Oakley and Brielle De Anda, 15 great nieces and nephews, and his step-children Angela Marinelli, Nicholas Marinelli and wife Jyllian, and Giovanni Marinelli. In addition to his parents, he is predeceased by his brother, Sakir Ata, sister, Nurhan Smith, and sweet pup, Sky. In lieu of flowers, donations can be made in Erol's name to the Randolph Regional Animal Shelter, at 97 Ironia Rd, Mendham, NJ 07945, (973) 543-9333. Family and friends may pay their respects during the memorial service on Saturday February 6, 2021 from 2:00 – 4:00pm with an opportunity to say a few words about Erol immediately following at 4:00pm at Warren Hills Memorial Home, 234 West Washington Ave, Washington, NJ 07882. Funeral arrangements have been entrusted to Warren Hills Memorial Home. To send online condolences please visit www.warrenhillsmemorialhome.com .