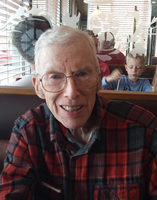 Raymond M. Taylor, 95, a longtime resident of the Washington area, passed away peacefully on February 16, 2020 at the Brakeley Park Care center in Lopatcong, NJ. Ray was born on December 13, 1924 in Brooklyn, NY to the late Alfred and Louise Taylor. Ray moved from Milburn NJ to Anderson Town, NJ at 17 to run the family hog farm. Even though he would normally have been deferred from wartime service due to his occupation as a farmer, he joined the U.S. Army and served in the elite 2nd Ranger Battalion, participating in the Battle of the Bulge and the race across Germany afterwards. Ray met his wife, the former Emma Gesner, in Washington while he was farming in Anderson Town and would walk the seven miles into Washington to court her. After returning from the war in Europe, Ray married Emma and would spend over 71 loving years together. Emma passed away in June 2016 at the age of 90. Following his service in WWII, Ray was accepted as a US Army Officer candidate and attended officer candidate school in Fort Riley, KS. This was cut short due to family obligations and he returned to Washington to begin his life and family with Emma. He and Emma owned Star Cleaners in Washington for several years before they sold the business when he went to work for Meyers Appliance in Easton. While working for Meyers Appliance, Ray attended night school at Lafayette College in Easton, concentrating on mathematics and electrical theory. This led him into being employed by companies such as Tung-Sol Electric in Washington, NJ, and later as an Electrical Engineer and Chief Engineer designing transformers for Nitronics, OPT Industries, and Magnetic Windings Company in Easton, PA. Ray retired as Chief Design Engineer with more than 50 years of transformer design experience for customers such as IBM, Texas Instruments, Kodak, and the US Department of Defense. Ray and Emma lived in White Township, NJ for over 70 years. Together they built a home on Buckhorn Drive on the top of Montana Mountain, where they lived until 2017. Ray was a strong believer in supporting the community and served early on as Civil Defense Coordinator for White Township. In subsequent years, Ray served on the White Township School board and spent over ten years serving on the White Township Planning Board, to include service as President of the Board of the latter. Ray is the past Commander, Secretary, and Financial Officer of American Legion Post 103 in Washington, NJ, and past Warren County Judge Advocate for the American Legion. Ray is survived by a Daughter, Holly E. Shoemaker, and her husband Ron of Langhorne, PA; Sons Paul D. Taylor and his wife Nancy, and David A. Taylor. A sister, Lydia L. Inderwies of Cape May, NJ; and a brother, Richard F. Taylor of Nashville, TN; five grandchildren and nine great grandchildren spread across the Eastern Seaboard. A graveside service with American Legion honors will be held on Thursday, February 27, 2020 at 10:30 o'clock, at Montana Mountain Cemetery in Harmony, NJ.