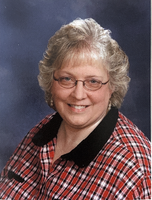 Deborah A. Hoyt, 55, a lifelong resident of Belvidere, NJ passed away peacefully on January 12, 2020, at Morristown Medical Center. Deb was born on October 18, 1964, in Wilson Borough, PA to William and Beverly Sarson VanAlthuis. Deb graduated from Belvidere High School, Class of 1983, and also attended Centenary College. She was employed as Church Administrator for the United Presbyterian Church in Belvidere, where she was also a congregant and the director of Sunday School and a teacher. She married the love of her life, John Hoyt, in 1995. Previously, Deb was a former manager at the Arc of Warren County as well as the former co-owner of Hoyt's Home Center. Deb enjoyed reading, crocheting, crafting, playing games and cooking. She loved spending time with her family and friends, as well as her pets, Teddy and Leo. In addition to her husband of 25 years John Hoyt and her parents, she is survived by a son, Matthew Hoyt; a sister, Tina Jones and her husband Randy; nephew Dylan Jones; mother-in-law Gertrude Hoyt; brother-in-law Gary Hoyt and his wife Kathleen; sister-in-law Linda Strait and her husband Jeffrey; brother-in-law Frank Hoyt; nephew Steven Strait; niece Missy Strait; niece Ellen Duveneck and her husband Ryan; niece Rachel Chiara and her husband Rocco; great-nephew Luca Chiara; great-nieces Lena Duveneck and Emma Chiara; her dog Teddy, and cat Leo. Family and friends may pay their respects on Saturday, January 25, 2020 from 9:00 AM – 12:00 PM at the United Presbyterian Church. 224 Mansfield St. Belvidere, NJ. 07823. A memorial service celebrating Deborah's life will begin at 12:00 PM at the church. Inurnment will follow at Belvidere Cemetery. In lieu of flowers, donations in Deborah's name may be made to the United Presbyterian Church Building Fund. 224 Mansfield St. Belvidere, NJ. 07823. Funeral arrangements have been entrusted to the Warren Hills Memorial Home.